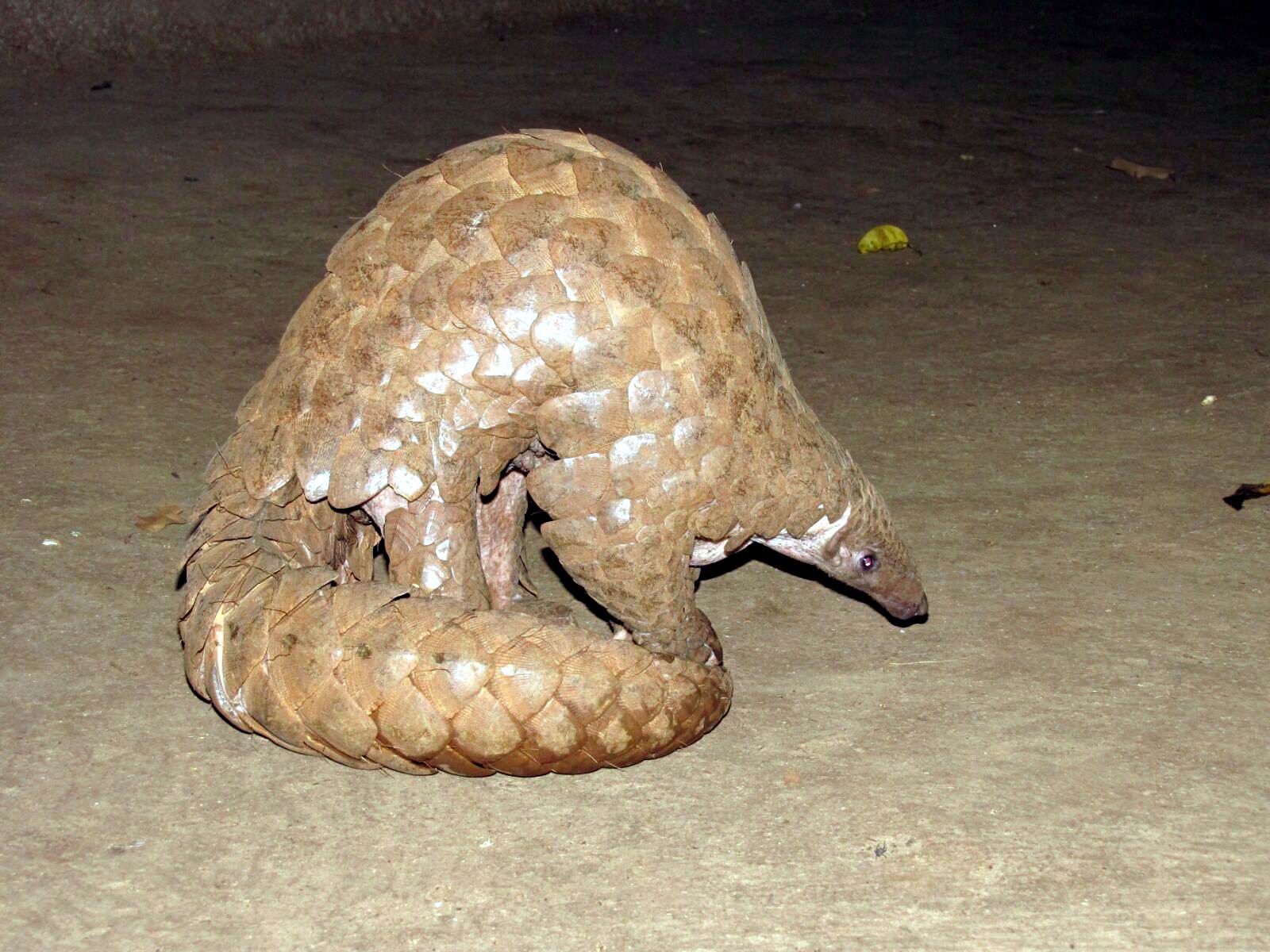 Pangolins or scaly ant-eaters are the only true scale bearing mammals known to the world. There are eight species of Pangolins existing in the world. Of these, two species viz. Chinese Pangolin (Manis pentadactyla) and Indian Pangolin (Manis crassicaudata) are found in the Indian sub-continent. All Pangolins belong to Family Manidae of Order Pholidota. Although two species have similar morphology, Indian Pangolin can be distinguished from the Chinese Pangolin based on the size of the scales.

They are nocturnal and shy creatures leading a secretive life. They spend most of their life as solitary animals (except during mating). They are insectivorous mammals, feeding on eggs, larvae and adults of ants and termites, thus acting as biological pest controlling agents. They use their long sticky tongue for feeding on these insects and are devoid of any teeth. They remain inactive and hide in their burrows during day-time. They roll their body to form a ball like structure in-case they sense presence of predators in their vicinity. They secrete strong odour through their anal glands that is used in defense.

Where are Pangolins found in India?

Chinese Pangolin is known to occur in the Northern and North-Eastern India. Indian Pangolin is widely distributed throughout the country except the Himalayan region. Indian Pangolins are not habitat-specific and are known to occupy various types of tropical forests as well as grasslands, open lands and degraded habitats. Indian Pangolin is known to be present in Kerala, Tamil Nadu, Karnataka, Andhra Pradesh, Telangana, Maharashtra, Gujarat, Rajasthan, Madhya Pradesh, Chhattisgarh, Jharkhand, Bihar, Odisha and West Bengal. It is also present in the Himalayan foothills of Uttar Pradesh and Uttarakhand.

Why are Pangolins under threat?

Presently, Pangolins are known as the most trafficked mammal in the illegal wildlife trade. They are secretly hunted for their scales and meat. The keratin scales are believed to have medicinal properties and are used widely in traditional Chinese and in some traditional Indian medicines.The scales are believed to have aphrodisiac properties. However, scientific evidences identifying the bio-active constituents in scales are lacking. The scales are also used in manufacture of boots, bullet-proof jackets etc. The scales and skin of an adult Pangolin together weighs about 3.5 kg. The meat is relished in many countries like Vietnam, China and Nepal. Moreover, there is no information available on the population levels of Asian Pangolins due to their secretive nature.

Pangolins have been included in Endangered Category by International Union for Conservation of Nature (IUCN) and are listed under Appendix II of Convention on International Trade in Endangered Species of Wild Fauna and Flora (CITES). The Wildlife (Protection) Act, 1972, imparts the highest degree of protection to these creatures since Pangolins are listed under Appendix I of this act. In spite of having legislative protection, Pangolins are still secretly poached and illegally traded.

Are Indian Pangolins under threat in Konkan region?

Recently, 44kg of Pangolin scales was confiscated near Chiplun in July 2015 and 12 kg in February 2016 near Dapoli. These incidences prompted SNM team to gear up for Pangolin conservation.