eMammal India project seeks to promote scientific understanding among children of age group between 11-14 predominantly from rural and tribal schools of Maharashtra, India. Thus, the project aims to provide first-hand experience of technology to rural students by using scientific equipment, audio visual aids and internet to expand their curiosity about biodiversity and develop greater appreciation for the natural world, along with providing a common platform for Indian students from different geographical, technical and economic backgrounds and learn how, despite their regional differences. Following project aims at capacity building of rural India by directly involving the future conservator’s i.e. young minds (Students) who will be extensively trained technically as well as scientifically, as training workshops ordained to be conducted at each selected school individually. Within the training program students will be trained to handle camera traps, their installation process accompanied by Monitoring. All these activities are meant to be carried out by students independently their after, although never ending support will be provided by us. For smooth functioning of the program each school is bound to recieve a laptop, projector, 3 camera traps along with internet connection. The images captured will be uploaded by respective schools directly onto the eMammal website and stored in a depository. The project is executed in collaboration with Bombay Natural History Society and State Forest Department for the duration of two years. Sites selected for project are konkan and western ghat region of Maharashtra which includes Palghar, Thane, Raigad, Ratnagiri, Sindhudurg, Satara and Kolhapur districts of Maharashtra, among which 20 rural and tribal schools are targeted. It is a Citizen –Science Based project that uses camera traps to document following.

What are Camera Traps?

The camera traps are remotely placed motion-activated and have an infrared flash, to minimize the disturbance of the animals.

A state level workshop for training students and teachers was organized at Chiplun, Ratnagiri.30 students with 15 teachers belonging to 15 schools from seven districts participated in e-Mammal training workshop which occurred on 1st of April 2017 at madhav sabhagruh, Chiplun from 10 am to 4 pm. The following workshop was organized, under E-Mammal Project supported by ICICI Bank Ltd. and collaboration between Sahyadri Nisarga Mitra Chiplun, and Bombay Natural History Society (BNHS) Mumbai. Workshop proceedings started off with preliminary introduction of e-Mammal project was delivered to participants, where what is e-mammal? Agenda of the project and role of participants in the project was described. A teacher and two students belonging to 8th and 9th standard participated from 15 schools. Each school was granted with advance automatically operated (Day/Night) 3 Trap Cameras, Laptop, Internet Dongle, Measuring Tape, 3 Metal Case for camera protection, 6 Memory Card, Batteries for camera, HDMI-VGA Cable, 6 Locks along with key and key chains and a safety chain to tie the camera. The remaining three schools received their equipment at the time of training organized at each school independently. Additionally a hands-on training on operating advance camera traps and eMammal desktop application, to all the participants was rendered. Where first participants were introduced to camera trap and its working, further a practical was conducted where all the participants were asked to open their cameras and to follow the instructions given where they were taught to insert batteries and memory card. Else they were asked to switch on their cameras and were introduced to primary functions which are necessary for the deployment of camera. Any occurring queries while operating the camera by participants were answered on the spot. Also a brief demonstration was given on how to use laptop and internet dongle. Beside a demo was given to participants on how to use e-Mammal desktop application which will be used to upload collected data from camera traps. A practical was conducted in the premises of hall which had ample number of trees, within the practical participants were demonstrated with right ways to deploy a camera on field. Various small things were focused on such as starting from selection of tree, filling the deployment sheet till conducting a walk test and finally arming the camera. After getting to know how, the participants were asked to choose a tree and mount their cameras within the premises. An ample amount of time was provided for them to carry out walk test and finally to arm the camera. All the participants carried out the practical with great enthusiasm and excitement.A few notable students mounted and operated the trap cameras excellently and a spark of future conservationist was seen within them. At the end a question answer session was arranged to tackle any queries of participants on operating and deploying trap cameras on field. 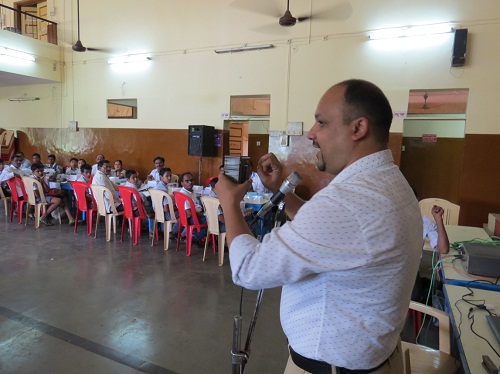 After successful state level workshop conducted at Chiplun, on 1st April 2017 it was the time to steer an independent training program at each selected school. Through this training program we were able to handover the equipment granted under the e-Mammal project to those schools which could not attend the state level workshop due to early commencement of their annual examination. Also this training allowed us to address issues faced by schools while deploying camera traps. A 20 day’s tour was planned according to the school location. At first nearby schools of Raigad and Ratnagiri district were visited then subsequently schools from Sindhudurg district were next in line next we marched up the Ghat’s and entered Kolhapur after that Satara district was covered and at the end a school from Palghar district was visited. For the training program our officials travelled from school to school and delivered training on camera operation and deployment of camera to students belonging to 8th and 9th standard along with participating teacher/teachers. Students responded with great enthusiasm and excitement their ability to learn new things quickly is stunning beside teachers were not far behind of them even they shared the equivalent amount of enthusiasm. The cameras set up by some schools were reviewed on field and guided the rest, in deploying the cameras on field by establishing separate batches of students containing 5-10 students depending upon the strength of class. These groups were handed over with all the equipment and were monitored while deploying the camera. All the cameras were deployed safely and securely.