Feeding helps to improve success in natural breeding of Vultures at Anjarla, Ratnagiri

As the vultures appear to be ugly, this species is neglected by human beings. But in fact the vultures play an important role of a clean-up crew in nature and help in keeping the surroundings clean. As such they help in preventing diseases by eating carrions. Hence this species needs to be protected and conserved. Three species of vultures namely the Oriental White-backed (Gyps bengalensis), Long-billed and Slender-billed vultures have colonies in Asian countries. All these species are declared critically endangered. Their number is catastrophically declining in our own country as well as in neighboring countries. It is said that Diclofinac is the main threat to the species. This drug is used as a pain-killer for livestock. The vultures develop kidney failure and visceral gout and die within few days after consuming the carcasses contaminated with Diclofinac. The Government of India has banned this drug but the problem of declining vulture population still remains.

Under the circumstances we decided to obtain as much data as possible on vultures found in our area. We were observing this species since 1992 but started actual work in the year 2003. We focused on two species - Oriental White-backed (Gyps bengalensis) and Long-billed. These birds operate in a wide geographical area and it is very difficult for just one NGO to monitor them and we feel this should be a community-assisted activity. In essence we decided to work on the species found in our area only.

At first, we found only two colonies of vultures at Anjarla and Murud in Ratnagiri district in the year 2003. We started to observe the colony, visiting weekly and kept records. We installed a close circuit T.V. camera on the nest and observed activities on T.V. from a nearby house. After three years of observation we noted two main reasons for breeding failure.
First is false incubation for long period. Without laying an egg in the nest both adult birds take turns to sit in the nest as if incubating the eggs. They do this for two to three months. What makes them do this?
Second reason is scarcity of food. Vultures feed mainly on carcasses, especially of livestock. Since the last few years though, under 'Sant Gadage-baba Gram Swacchata Abhiyan' (clean village initiative) the villagers have started burying the livestock carrions. As a result the vultures do not get their staple food.
We have confirmed both our doubts. We arranged a local climber to watch inside the nests of vultures periodically and after a year analyzed the collected data. It showed 45% false incubation in Anjarla colony. We also conducted a survey in 50 villages around Anjarla colony and the data shows that 80% of dead livestock was buried. 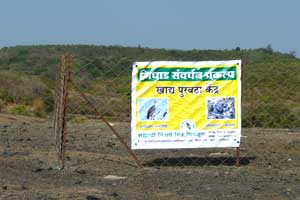 To overcome both these threats we decided to feed vultures in the Anjarla colony. We prepared a 2000 sq.ft. fenced feeding ground using GI chain link where vultures could feed and there would be no disturbance from feral dogs. This would keep the village clean too! At Anjarla we appointed a person to lift dead animals from villagers and dump them in the fenced area near breeding ground. He uses an old Tatamobile (a pickup truck) for this work.
By distributing handbills in the nearby villages we announced that our appointed person will pick up any dead animal right from the house. Slowly but steadily this system worked. In last breeding season around 40 dead animals were made available to vultures.

Results of the above experiment were positive. False incubation declined to 13% from 45% and breeding success rate increased to 40% from 16%. We think these are good results and they strengthen our belief that Diclofinac may not be the only reason for the dwindling population of vultures.
To further confirm this result we are planning to replicate this project at two other breeding colonies in the coming breeding season.
Most of the nests were on coconut (Cocos nucifera) trees. In the last five years usage of coconut tree for nesting has come down to 90%. Farmers destroy the nests since vulture droppings (which is heat-producing) and their activities cause reduced coconut output and sometimes the trees even die. We have recommended to the Maharashtra State Wildlife Advisory Board that they should give compensation to coconut tree owners where there are vulture nests. The Department has technically accepted this and given orders to conduct a survey.
Two young birds had fallen and were injured during their first flight. We kept then in cage for about a month, regularly fed them and released when they were strong again. They successfully joined other vultures.