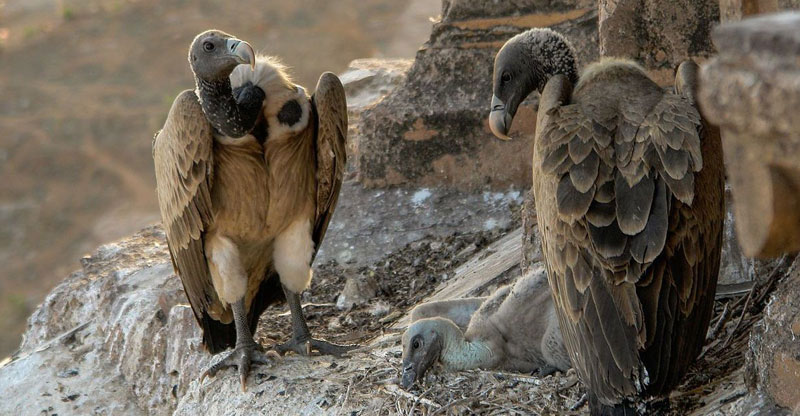 Identifying features: Plumage is light to dark brown. Head is small and blackish while neck is long which is patchily covered with whitish-brown down-like feathers. Thighs have white feathers. Juveniles have slightly lighter plumage as compared to adults. Bill is longer and grey in color. Tip of the upper mandible is hooked.

Nesting: Nests in small colonies usually on cliffs. Nests are enormous and constructed with the help of sticks and lined with green leaves and rubbish.

Eggs: 1 egg is laid which is oval and white in color sometimes lightly spotted and blotched with reddish brown. Only 50% of nest produces eggs each year.

Incubation: About 50 days. Both parents are involved in incubation.

Food: Feeds mainly on carrion it may be putrid or fresh.

Current status: The population has suffered a major setback with decrease of over 97%. It has been listed as “Critically endangered” by IUCN.

Major threats: The anti-inflammatory drug “Diclofenac” used to treat domestic livestock is said to be the major cause of threat. Although the drug is banned in India it is not sure if its use has been completely stopped. Efforts have been taken by government and NGO’s to restore the population. Efforts include both in-situ and ex-situ conservation. In-situ conservation involves creating awareness among local communities and chemist regarding usefulness of vulture with respect to environment and its current decline in population and reason for its decline, establishing vulture safe zones, meeting Veterinary doctors and taking necessary steps to stop illegal use of Diclofenac. Ex-situ conservation involves captive breeding of critically endangered vultures as the one taking place at Pinjore, Haryana.