Status and breeding of the Indian swiftlet

Status and breeding of the Indian swiftlet (Collocalia unicolor) in South Konkan, Maharashtra.
-A report by Vishwas Katdare and Ram Mone

Indian Swiftlet Collocalia unicolor is a tiny blackish brown bird with a slightly forked tail. It is a resident bird in coastal and western ghats strip from Ratnagiri southwards throughout the west coast. It is also found throughout Sri Lanka. This swiftlet builds its nest in natural caves and groots in western ghat complex or in rocky islands. Breeding season is March to June. The bird builds the nest with its own saliva which has some gastronomic and commercial value (Ali & Ripley 1981). On 8th April 2001, we visited Vengurla Rocks for bird watching and saw a nesting colony of this swiftlet in a cave on Bandra Rocks (local name of islet). In this cave we found thousands of nests of this species and also Bamboo scaffolding erected by poachers to collect nests for smuggling. This nest collecting activity has been going on since many years. We informed the forest department and they arrested the poachers red-handed on 17th April 2001. No information is available regarding the current status of the species. We undertake this survey to find out current status and poaching activity in the area.
Humayun Abdulali visited the rocks 2/3 times. In May 1981 he saw a few swiftlets flying near the entrance of the cave and also the skylight (Abdulali 1983). In March 1941, he had seen only the nests but no swiftlets during the daytime. However, he saw the birds swarming in through the main entrance after dark (Abdulali 1942). In February 1938, he observed the nests inside the cave, but no fresh-built nests were found and swifts were not present (Abdulali 1940).
In May 1988, Madsen observed a few dozen swiftlets wheeling around over the water near Vengurla Rocks (Madsen 1988).

Walked along the coastline. Located caves with the help of locals. Used sailboats to observe the rocks and islands in the sea.

There are only two breeding colonies in the area. The biggest one is the Bandra rocks cave. There are 5000 nests of the species. Second one is in the dome of an old lighthouse building which is very small and started recently. Here there are only 46 nests. 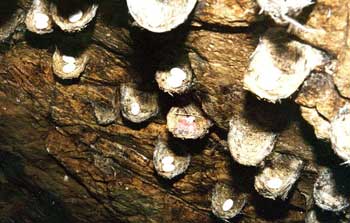 On 8th April 2001 we landed on Bandra Rocks and saw Indian swiftlets flying near the skylight and at the seaside entrance of the cave. We climbed down the cliff and entered through the Northern entrance of the cave. There were thousands of swiftlets engaged in nest building. Nests were in all the stages of construction. Also huge scaffolding was seen all over the cave erected by poachers to collect the nests. Heaps of old bamboos lay on the ground. A thick layer of bird droppings was seen all over the ground as well as on the top surface of scaffolding.
On 6th June 2001 we did not see any swiftlets near the cave. Due to rainy season seaside entrance was submerged and water reached up to half length of the cave. It was not possible to climb down from sea side and we managed to enter the cave through the skylight by using a rope. Due to our presence some of the swiftlets flew away and we saw eggs and chicks in the nests. This time we noticed that the nests were made up with more grass and feathers than saliva. These second batch nests were all over the cave. After our first visit poachers collected almost all the nests from the cave and we found only 3/4 nests from the first batch. The density of nests was high at places where there was darkness and low at light. Density was measured at 5 places and found to be 12, 18, 20, 38 and 40 nests per square meter. Out of 40 nests 11 nests had 2 eggs, 14 nests had 1 egg, 1 nest had a chick, 1 had two chicks and 13 were empty. Distance between two nests was 3-5 cm. In some nests we saw both egg shells and chicks at the same time.
On 19th November we visited the rocks again. Old nests seen on 6th June were still there but there was no sign of swiftlets. At 1330 hrs we observed 300 to 400 swiftlets flying high over the rock. After 30 minutes they flew away. Again when we came back to Nivti, we saw 400 to 500 swiftlets flying over the creek, very high in the air where it was difficult to identify them even with binoculars.
On 16th December 2001 we reached the rocks at 1900 hrs and swiftlets were already roosting in the cave, clinging to their nests. Birds were noisy throughout the night. At 2000 hrs their noise reduced a bit. On the next day at 0430 hrs the noise increased and two three swiftlets started flying in and out of the cave. At 0603 hrs they began to leave the cave from the seaside entrance and up to 0613 hrs there was a continuous flow out. From 0613 to 0620 hrs the flow reduced in number, and from 0620 to 0625 hrs only 2/3 birds were seen leaving the cave. After 0625 hrs no bird flew out. All along, the birds used main entrance instead of the skylight. Bamboo scaffolding was still in the cave.
On 1st May 2002, after protection given to the swiftlets it was our first visit in breeding season to the rocks. The bamboo scaffolding was already removed by forest department. The nesting was in progress and almost all the nests were having one or two eggs. 58 nests were counted in one sq. m. in which 29 had 2 eggs, 21 had 1 egg each and 8 were empty. This year we found the nest density was more at low level. This clearly indicates that the protection helped to increase the number of nests.

On 8th April 2001, nest building was going on. A thick layer of dropping was seen under the nests. On 16th December 2001, 46 nests found but no swiftlets seen during daytime.
On 1st may 2002 some swiftlets were seen feeding the nestlings. The old lighthouse building is in ruins and survival of this breeding colony is not possible for long time.

On 8th April we saw whitish nests of swiftlets made from saliva with less quantity of grass, moss and feathers. The nests were shaped like a deep oyster shell, 46-48 mm O.D. and 42-45 mm I.D. in size. All the nests were on both sides of the cave and also on the ceiling very densely. Cockroaches were seen all over on the ground and on bamboos. Bugs were seen in the nests. In about 2 months poachers collected almost all new nests and on 6th June 2001 we found the nests with less quantity of saliva and greater quantity of grass. On 1st May 2002 swiftlets were seen using their old nests with patchwork done using saliva.

The Bandra Rocks colony is very old and the poachers are collecting the nests since 10/15 years. If the poaching continues this species may not survive. The only solution is to protect the area from poachers. This will be possible if the rocks are acquired by the forest department and declared as a sanctuary (there is also a breeding colony of terns on the rocks). The newly started nesting colony at the old lighthouse is very small. The lighthouse building is also in ruins and the possibility of survival of the colony is very low. It would be prudent to construct medium size dome-like structures on some rocks in the area to provide additional nesting sites for the species. The locals are not aware of the poaching of nests!