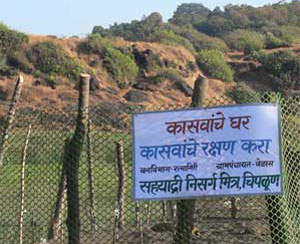 To protect nests we chose ex-situ method and erected hatchery of size 8 x 3 x 1 mtrs, on Velas beach, with G.I. mesh and wooden posts. As breeding season commenced SNM's members started round the clock patrolling on some 3 km. beach at Velas. Locals were not aware about importance of turtles as well as the need to protect them. We arranged awareness programs such as meetings, exhibitions, lectures, slide-shows for locals. As villagers realized the importance of turtles, they extended cooperation and started patrolling with us. The project was about 125 kms away from Chiplun, our native place, so we were unable to go daily to the site hence appointed a local person to look after the hatchery and patrolling. We were regularly monitoring the same. First year we protected 50 nests and released 2734 hatchlings with 50.89% hatching success!

Armed with last year's experience, in this breeding season SNM started protection work at three new beaches namely Anjarla, Saldure and Murud besides Velas, all in Ratnagiri district. Poaching of eggs and adults as well as incidental catch were the main threats to turtle population in this area. G.I. mesh hatchery was erected on each beach. Our team members along with locals patrolled daily to locate the nests. We appointed a local to look after hatchery. Arranging awareness programs like in Velas the previous year worked here as well. Additionally we distributed handbills, stickers, and conducted poster campaign regarding turtle conservation. This year at above four sites, we protected a total of 3506 eggs within 35 nests of Olive Ridley (Lepidochelys olivacea), and 1687 hatchlings were released with 48.11% hatching success.

The beach changed its topography this season and became little narrower. We located our hatchery on a small dung of sand about 10 meters away from last year's location. At Velas, we protected total 3028 eggs within 30 nests and released 1500 hatchlings (49.53%).

Village Anjarla, some 10 kms south of Velas, is located on north bank of estuary and has about 4 km stretch of beach. This village is well known as a tourist place for its old Ganesh temple. The beach is broad and adjacent to human population. The tourists regularly visit this beach. Locals mentioned that the marine turtles used to come to nest on this beach in good numbers till about 10 years back, but since then there has been a decline in number of nesting turtles. A total of 4 nests were protected in Anjarla having 385 eggs and released 153 hatchlings (39.74%).

Village Saldure is 6 km. south of Anjarla. This beach is quite short in length but it is connected to next village beach of Harnai and therefore total length of beach extends to 2 kms. This beach used to be a nesting site until a few years ago. However, nowadays lot of bullock carts ply on this beach during late afternoon and evening time ferrying fish brought in by fishing boats. This probably scared the nesting females away and as a result we could not find a single turtle in the whole season.

Our forth site was at Murud, some 8 kms south of Anjarla, having 2 kms long and broad beach. Beach resorts are constructed on these beaches and tourist activity lasts up to late night on entire beach. This has scared away nesting turtles and their numbers are on decline since last ten years as per locals. We found only one nest in entire season. Total 93 eggs were protected and 34 hatchlings (36.55%) were released.

We were trying to undertake this work on more sites and in this third successive year undertook actual protection work in ten villages from three districts. Dive-Agar, Harihareshwar in Raigad district; Velas, Kelshi, Kolthare, Karde, Dabhol, Ambolgad and Madban in Ratnagiri and Tondoli in Sindhudurg district covering some 200 kms of coastline.
Three sites from last year namely Anjarla, Saldure and Murud were not selected for actual protection work due to lack of potential. Before the breeding season we surveyed the coast of district Sindhudurg, Ratnagiri and Raigad to select probable sites. The selection of actual protection work site depends on number of nestings occurring on the beach and response by the local population to protection work.

This village is a well known tourist spot in District Raigad and nowadays is famous for the golden idol of Lord Ganesh in a temple. The beach is about 4 km long. The protection work was started with the help of another NGO called Sahyadri Mitra from Mahad, district Raigad, and protected 4 nests with 489 eggs and released 237 (48.46%) hatchlings. 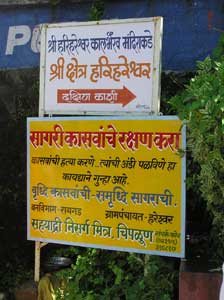 The Harihareshwar village in district Raigad, is situated on the north bank of Savitri creek and is famous for Shri Hareshwar temple, popular with hindu pilgrims . About 4 kms of stretch of beach is bifurcated in two parts by a rocky hillock. We erected hatchery on river side of the beach and adjacent to village Bagmandale. We found four nests on this with 455 eggs, and released 255 (56.04%) hatchlings.

This was the third breeding season of our protection work on the Velas beach. This year we protected total 14 nests with 1468 eggs and released 744 (50.68%) hatchlings.

This is a well-known tourist spot in district Ratnagiri. We found only one nest with 51 eggs on the 3 km long beach and released 14 (27.45%) hatchlings.

About 1 km long beach of Karde village is partially rocky. Information about nesting of turtles on this beach was received during our survey and we monitored the beach during breeding season. But we could not find a nest or any evidence of nesting in entire breeding season.

This beach is about 2 km long and not very wide. There is hardly a distance of 5 mtrs between high tide level and groves. We protected four nests here and released 82 (25.46 %) hatchlings from 322 eggs.

Dabhol, taluka Dapoli, district Ratnagiri is a historic harbour. This village is situated on north bank of river Vashisthi and now famous for Dabhol Power Station (erstwhile Enron Project). This beach is about 2 km long and there is Casuarina plantation on the beach. Five to six years back a big storm damaged this plantation and a major portion of the plantation has fallen on the ground causing obstruction to the turtles' passage towards nesting sites onshore. The locals revealed that until a few years ago many turtles used to come for nesting on this beach but over the years their numbers have declined. We found only 4 nests on the beach and released 233 (56.82%) hatchlings from 410 eggs.

Ambolgad, taluka Rajapur, is on the southern side of Ratnagiri district. The beach is about 3 km long and quite wide. The beach is bifurcated with a rocky patch in between. There is a local road at one end of the beach while other end is comparatively remote. Turtles used to come for nesting and locals would collect eggs. We appointed a person for patrolling in whole season but no nest or any evidence of nesting was found on this beach.

This village is situated on the southern boundary of Ratnagiri district and right bank of the Vaghotan creek. There is Casuarina plantation on the beach. The beach is about a kilometer in length but not very wide. No nest or any evidence of nesting was found during entire season.

Tondoli village is in Sindhudurg district. It has a long (about 4 km) wide beach and major portion of beach is either inhabited by humans or Casuarina plantation. No turtle nests were found.

We protected a total of 31 nests and released 1565 hatchlings into the sea.

This year we took this movement to entire coastline of Maharashtra and at fifteen villages actual protection work was undertaken and awareness programs arranged. The villages were Chikhala and Vadrai in Thane district; Murud, Diveagar, Maral and Harihareshwar in Raigad district; Velas, Kelshi, Kolthare, Dabhol, Sandkhol, Varavade in Ratnagiri distict and Tarkarli, Deobag and Bhogave in Sindhudurg district. Total 36 nests were protected and 1624 hatchlings released in to the sea.
Four villages from last year namely Karde, Ambolgad, Madban in Ratnagiri district and Tondoli in Sindhudurg were not selected for actual protection work as there was not a single nest found.

This was the second successive year in this village. The protection work was started with the help of Sahyadri Mitra, NGO from Mahad (Raigad) and we protected 3 nests and released 115 hatchlings.

This was fourth breeding season of our protection work on this beach. This year we protected total 21 nests and released 995 hatchlings.

We found only one nest and unfortunately no hatchlings emerged out of it.

We protected two nests but unfortunately no hatchlings emerged here as well.

We found only 2 nests on the beach and released 175 hatchlings.

This is a well known tourist place in Raigad district and famous for Fort Janjira. This year one nest was protected and released 42 hatchlings.

This is a small village next to Harihareshwar. There is a small sandy beach. One nest was protected in this village and released 12 hatchlings.

This small village in district Ratnagiri near Jaigad fort had one nest protected but no hatchling emerged from the nest.

At remaining six villages that is Chikhala and Vadrai in Thane district, Varavade in Ratnagiri distict and Tarkarli, Deobag and Bhogave in Sindhudurg district hatchery program and regular patrolling was done but unfortunately not a single turtle visited these beaches for nesting in entire breeding season.

A total of 36 nests from fifteen villages were protected and 1624 hatchlings were released into the sea.

During last four years of our work, although the number of protected sites increased, number of nests found at these sites has actually decreased (See Conservation report - Table 1). If we take example of the Velas site where protection work was carried out every year for last four years, first year we found 50 nests, 30 nests in second year, 14 nests in third year and 21 nests in fourth year. These figures clearly indicate that there is a drastic decline in visiting turtles on west coast.